You are here: Home1 / Other Things You Should Know2 / Helpful Terminology 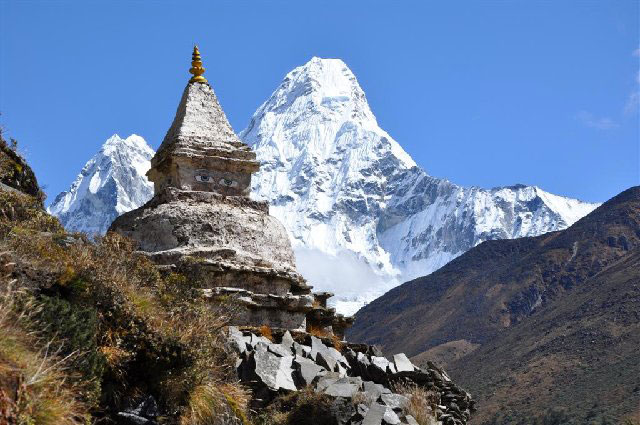 Chorten; the Tibetan word for a stupa, a mound-like Buddhist structure.

Col; a pass or depression in a mountain range or ridge.

Dhanyabaad; Nepali for thank you.

Ghat;  series of steps leading down to a Hindu holy river.

Jatra; a street festival or carnival.

Kani; an arched stone gateway normally astride an entrance to a village.

Kharka; the Tibetan word for a (high altitude) meadow.

Khola; a Nepali word for a river.

Koshi; another Nepali word for a river.

La; the Tibetan word for a mountain pass.

Lhosar (or Losar); a Tibetan word for New Year.

Monsoon; the rainy season, from early June to late September.

Newar; the people and language of the inhabitants of the Kathmandu Valley.

Tea-shop or tea-house; a small lodge which provides accommodation and food with some basic necessities for sale.

The Terai; the lowland plains that border North India.

Yak; basically a high altitude long-haired cow with short, thick legs, humped shoulders and large upcurved horns. Strictly speaking the yak is the bull and the female is a nak or dri. Many of those that you come across are the result of cross-breeding with cattle and are known as dzo (m) or dzomo or zhom (f).

Yeti; sometimes known as ‘The Abominable Snowman’ this creature inhabits the High Himalayas and occasionally attacks livestock and humans.

The below images are recently reported sightings.